It’s the 1960s, 50s, 40s, 3—you get the idea—and Jim Crow laws have neatly segregated white and black people to the point that neither race has to interact with one another, and white people are free to use cleaner, better facilities without even having to see a black person.

Now, it’s 2019. Many spaces are still predominantly white, but there’s much more integration. This integration is observed, internalized with discomfort, and results in white people across the nation calling the police to detain, restrain, or remove people of color (POC) from public spaces, likely due to their discomfort with diversity. Recently, a string of memes along the same vein have been created to make light of very real and possibly traumatizing situations. The memes include a person, often white, with a phone attached to their ear. The memes vary in what text may/may not be included, but generally the meme is along these lines… 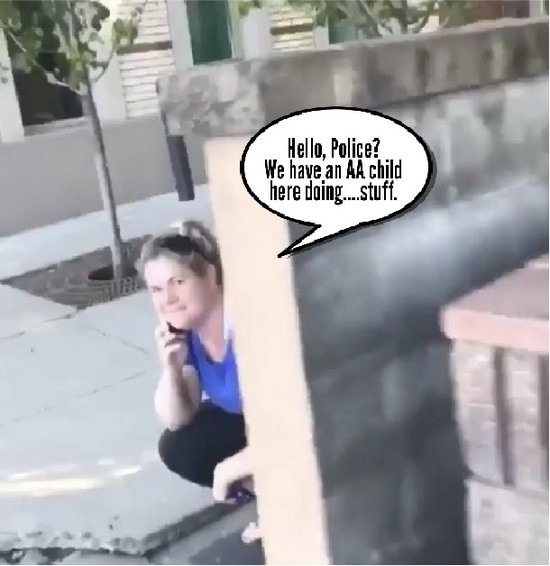 Both are pictures taken during real instances in which white people have called the police on black people for existing in community spaces. In the first picture, a woman is calling the police on black people hosting a BBQ in a public space. It harkens back to segregation and exclusionary white-only spaces. In the second photo, a white woman attempts to hide while calling the police on an eight-year-old black child selling water without a permit. It’s tempting to lean on the family’s lack of permit as justification, but I present another instance in 2018 during which a white Yale student called the police on a black student who was napping on school grounds. Now, imagine for a second that you’re existing harmlessly in a space, whether you’re taking a nap, playing golf at your own pace, sitting in Starbucks, or simply living on property you either own or pay to rent, and not only does someone who doesn’t know you call the cops, but the cops arrive and likely accost you for a phone call that shouldn’t have happened in the first place.

Sometimes there doesn’t even have to take a phone call. This was the case for a Boulder, Colorado resident, Zayd Atkinson, who was harassed by police who observed him on his property in March, 2019. In the video below, you can hear Atkinson say multiple times that he is attempting to clean his yard on his own property. The incident is caught on video 9 minutes into the encounter when Atkinson was first approached by an officer. “I couldn’t help but notice you just sitting on the patio out there,” the officer said. Aka existing while black. The police officer escalates the situation by insinuating Atkinson has a weapon (a trash grabber Atkinson was holding to clean up his property) and should cooperate or face violence. “Then you’re probably gonna get tased,” the officer said when Atkinson refused to be detained by sitting on the sidewalk. Backup is called and the incident escalates to a point at which Atkinson accuses officers of pointing a gun at him. Though the internal investigation report denies this claim, there is footage of officers with their hands gripping an object at their waists. The incident ended with the man being forced to identify himself. This is another tactic police officers use, forcing people of color to have identification ready and on hand at any given moment in public. I don’t know about you, but my ID is not always readily in reach or accessible every moment while I’m out in public, and that shouldn’t be a prerequisite for me to be able to leave my home.

Too often when police are in confrontations with people, particularly people of color, they escalate the situation instead of de-escalating. The author has worked in the mental health and healthcare field for years now, and de-escalation is one of the first tools we learn in training and as a first line of defense when interacting with a patient or client who is confrontational. I have a hard time believing police aren’t trained on de-escalation techniques.

But police brutality is another beast all together. Right now, we’re discussing the beast that is new-wave Jim Crow: calling the police on black people who dare exist in the same spaces as white people. White people grow uncomfortable, thus they call the police. Or perhaps it’s something more sinister than discomfort. There are people today outside of the KKK, white nationalists, and the like who don’t think people of color should exist where they do. The confusing part is if pressed, they would deny they’re a racist. Which continues to make it difficult to fully encapsulate the concept of racism. People, as complex as we are, can have two or more conflicting thoughts, ideas, and ideologies, and act on them simultaneously. For instance, any number of the people who call the police on black people they don’t know may comfort themselves with the fact that they’re nice to the black people they do know.

Here’s a hint: that’s still racism. Picking and choosing who to discriminate against is still discrimination. So, calling the police on a black woman you don’t know on school grounds then returning to your room to watch Netflix with your black roommate is still racism. Police officers, walking past a white civilian on their property to accost a black civilian on their property is racism. Stopping and frisking someone because of the color of their skin is racism.

Stay in your homes, seems to be the message. Do not have a BBQ in a public space, don’t enjoy leisurely activities in public such as golf, do not sell anything because the illegality of how you conduct business may cost your freedom if you’re detained, if not your life. Do not nap in public settings of an education institution which you attend. Do not even step foot outside on your own property, lest you be forced to prove you belong, or face violence.

This is America, still. And these memes are created to make light of a horrifying situation, a kind of laugh to keep from crying tool. Various social media platforms are shedding light on this ill, and yet people, white people, still seem to refuse to contend with the elephant in the nation, in their own psyche. It’s hard to admit you may be a part of the problem. But your comfort is not worth countless lives that are lost daily because of institutionalized racism that we can all work together to change.